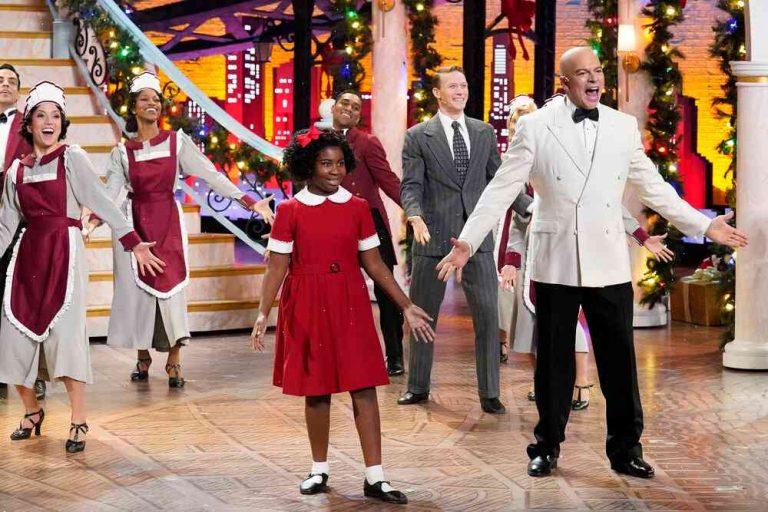 Its honest style — earnest production values, flawless timing — isn’t a good fit for the show’s labored show-tune interpolations or helium-inducing song parodies. But when Annie purrs “When I Grow Up,” or as the First Family and its cardboard-cutout ambassadors do in “It’s a Hard Knock Life,” it’s easy to overlook the lines and apologies for not understanding the jokes and situations (you’re just here for the music!) as well as the dated camp and indulgent silliness.

These vulnerabilities show in other director Matthew Warchus’s touring production, whose pencil-thin three-dimensional set (by Gianna Manes, and digital projections by Jonathan Wright) reminds you of all the CGI scenery tricks you sometimes miss during the summertime run. It turns out that there’s not a whole lot of CGI to work with.

Highlights of the aerial action during the Music Man-inspired circus bit are the seats in the Casino Rockers (new to the U.S. tour) that bounce up and down, like a crude Hall & Oates spoof. As ever, J. Eugene Pitman has a lot of fun as Oliver Warbucks, writhing with abandon as the show gets bad and the audience laughs. Most of us are used to seeing Pitman dressed this way as Legolas in “The Lord of the Rings” films, but the performances of the cast, as a whole, are imaginative enough to allow the character to take over a stage with “Annie,” “Hard Knock Life” and even “Sunny Came Home” to the surprise of most audiences.

Bledel’s nimble vocals, and even better Andrew Lloyd Webber tunes like “Maybe” (once again sung by Cameron Haney, now in the “Glee” role) are a refreshing contrast from the stereotype of the bitchy orphans or a parade of pearls adorned “girls” running around. Her blunt manner serves as a nice counterpoint to Jackie Hoffman’s Annie: she’s the most giggle-worthy on the stage and shows the mischief and viciousness lurking in a girl who likes rules. Bledel and Hoffman have a wonderful rapport, made better when Haney and Bledel sing “You’re Never Fully Dressed Without a Smile.”

The original “Annie” closed 40 years ago, but there’s nothing dated about its time-tested, optimistic feel, so we’re glad it’s still working.